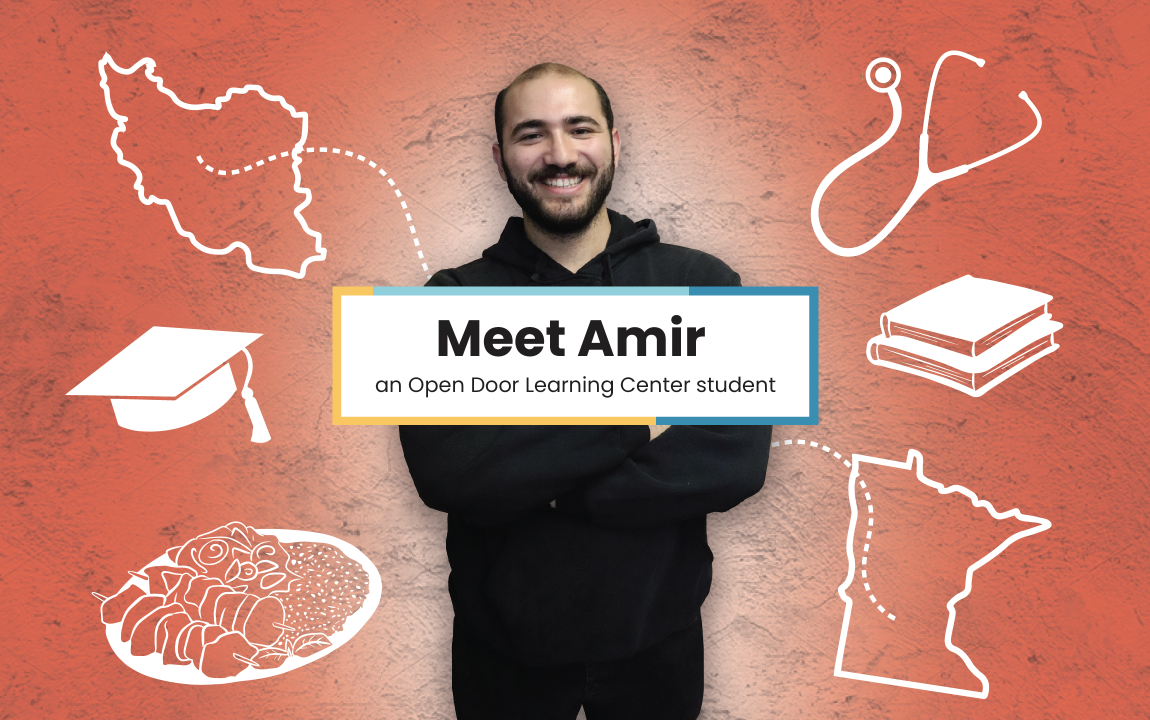 Did you know that as of 2020, one in 12 Minnesotans immigrated to the United States from an ever-changing array of nations?*

Today we introduce you to Amir, a 22-year-old immigrant from Iran with big plans to help people from all walks of life.

Amir moved to the United States with his mom approximately seven months ago, joining his father who has been living in Minnesota for 45 years. Shortly after moving here, Amir and his mom were referred to classes at Open Door Learning Center Southside by a family friend and have been in attendance ever since. “I like the teachers. I like the environment. We love school,” says Amir with a smile. “We don’t have a lot of money to pay for school and learning... so [this school] is perfect.”

At 22 years old, Amir has his sights set on becoming a physician. “In my country, I studied science and got a high score for the medical university.” His pre-university test scores would have allowed him to pursue this type of schooling in his home country, so he decided to reach for this goal when he came the United States.

“I am learning nursing assistance, but I also want to be a physician.”

After starting English classes, Amir completed Open Door’s Intro to Medical Careers class and passed the Pre-Certified Nursing Assistance exam. He is a native Farsi (Persian) speaker who also speaks Turkish, Pashto and Kurdish. Because he understands multiple languages, Amir’s dream to serve as a physician will be extremely helpful to many communities of people seeking healthcare.

“Amir is incredibly dedicated, helpful and positive. He will be a light to anyone who encounters him, and the healthcare field will be blessed to have him", says Nikki, his teacher at Open Door Southside.

Amir is thankful for the program and the classmates he has met. There are no other Farsi speakers at Open Door Southside, but that hasn’t stopped Amir from making connections with other learners. Since taking classes, Amir has participated in special outings, including a trip to St. Paul College and an Open Door Book Club camping trip with classmates.

Outside of school, Amir likes to go to the gym, work on his car and cook with his mom. “My mom is a chef, so I know how to cook.” He shared that his family runs a small catering business out of their house. His mom leads the cooking, but Amir and his dad support her in the kitchen. “We want to make a restaurant,” he says. Amir showed off his cooking skills to his Open Door classmates on the Book Club camping trip where he made sambusas and chicken kebabs for the group.

*Reported from the 2020 U.S. Census Bureau data via the Minnesota Chamber of Commerce